25 May 2022
In this Commentary article, we explore the innovative approaches towards drug target identification being championed by Cambridge-based biotechnology company PhoreMost. Identifying new druggable targets may help to address a range of unmet diseases.

A bottleneck in drug discovery has grown from a reliance on traditional Target ID approaches. There is a huge backlog of undruggable targets, as well as a huge amount of potential in undrugged targets. Benedict Cross explained to the audience at Oxford Global’s Discovery UK: In-Person event in October 2021 that PhoreMost’s current focus is on ‘drugging the undruggable’. By focusing on different targets and pathways, PhoreMost are taking a systematic approach to identifying novel drug targets and finding druggable or cryptic sites on known targets previously thought to be undruggable.

“We know there’s an untapped drug space,” began Cross, Chief Technology Officer at PhoreMost, “and much of it is known drug targets which have proven themselves undruggable.” The extant genetic strategies for Target ID gravitate towards druggable spaces – so the research and development of drugs is focused on known druggable targets in the human proteome. Known members of a druggable class are favoured since drug screening campaigns are expensive, and there are few technologies available when it comes to identifying new targets. As Cross said, “It’s difficult to break out of this known druggable space.”

“What we need to escape this undruggable whirlpool is a technology that discovers a target and delivers a mechanism to drug it.”

Part of the issue is down to the sensible series of pragmatic steps that each treatment must follow. Drug discovery scientists are unlikely to go through with the risks associated with taking unknown targets to a new space when known targets have already been subject to years of prior research. “What’s needed to escape this whirlpool is a technology that discovers a target while at the same time delivering a mechanism to drug that target,” Cross continued. PhoreMost are working to address this need: the Cambridge-based drug discovery company is building a pipeline of novel drug discovery programmes aimed at addressing a range of unmet diseases.

One solution championed by PhoreMost is PROTEINi, which Cross identified as a screening operation that exploits target proteins. “When I say PROTEINi, it describes a relatively simple concept,” he said, “which is the use of peptide fragments in place of small molecules.” These pools of programmed mini-proteins are used in place of small molecules to explore the biological nodes responsible for a given disease phenotype (as seen in Figure 1). This new technology enables the discovery of new targets and crucially, identifies the pockets into which drugs can be designed. “What we’re looking to explore here is the presentation of drug-like molecules in a physiological system that you can use to monitor and interfere with disease progression,” clarified Cross.

“Strategically speaking, what we’re looking to uncover in this is not necessarily a peptide which is active, but a peptide which describes a new starting point for drug discovery,” said Cross. “However, the past two years have seen the RNA delivery landscape change dramatically, especially with the successful use of virus and lipid nanoparticle vehicles for Covid-19 vaccines”.

PhoreMost’s phenotypic screening platform, SITESEEKER®, allows for the direct discovery of mRNA-encodable, intracellularly active mini-proteins (PROTEINi), which are ideal inputs into these new therapeutic delivery technologies. In one discovery campaign, PhoreMost investigated novel synthetic lethal gene interactions for the selective death of certain cell types, for example in cancer. The route for development can therefore be multipronged, either by direct drug development where targets are structurally-enabled, or via novel modalities like targeted protein degradation (TPD) or mRNA delivery approaches.

The opportunities for the application of the technologies developed by PhoreMost are sizable, particularly when it comes to TPD. “We’re focusing predominantly on oncology,” continued Cross, “and more recently we’re really interested in targeted protein degradation.” He added that he was excited to talk about the development of new TPD-based drugs and the opportunity to couple PhoreMost’s warhead discovery approach with novel E3 ligase binders to create heterobifunctional drugs. “Our platform can uncover phenotypically active warheads, but they can also be exploited in a TPD strategy, and we have also identified numerous new binders to E3 ligases,” Cross explained.

Planning the Future of Drug Development

Rounding off his presentation, Cross said that the positioning of PhoreMost’s platform in capitalising on the new opportunities in induced proximity is very timely, as these new and exciting modalities are starting to reach clinical validation. PhoreMost are continually developing and refining their technology. As Cross put it, the continued focus for PhoreMost will be on the discovery of new ligases and drug molecules in core therapeutic areas, and that there are opportunities for partnerships that could maximise the use of their platform. “We have bold ambitions to go even further than we have done so far,” he concluded. “We are configuring this approach to try and counter some of the bottlenecks in drug discovery, in discovering new ligases and new degrader molecules.” By expanding the druggable toolbox and improving access to undruggable targets, PhoreMost are aiming to do just that.

Visit our Discovery portal to learn about the latest advances in drug development and target identification. If you’d like to register your interest in our upcoming Discovery Europe: In-Person event, click here. 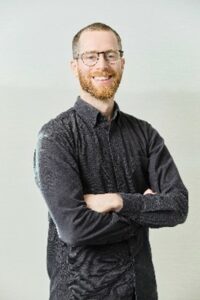 Ben joined PhoreMost in 2019 to direct the evolution and development of the SITESEEKER® screening platform. He is a geneticist and biotechnologist, with over ten years of professional research and management experience.

Before joining PhoreMost, Ben founded Horizon Discovery’s functional genomic screening platform. Using both pooled and arrayed approaches and both RNAi and CRISPR, Ben led the platform’s growth from inception to an internationally acclaimed and multi-million-pound revenue-generating group, executing hundreds of screens per year.

Stay up to date